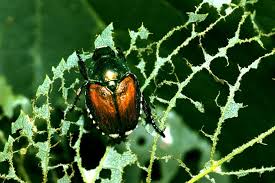 WHAT ARE JAPANESE BEETLES? Japanese Beetles (Popillia
japonica) are small (7/16th Inch long) iridescent green
bugs with coppery brown wing covers. They emerge to feed and mate in the summer
each year. The adult beetle lives for between 30 and 45 days. During which time
they are highly destructive to landscape as well as vegetable plants. They are not at all picky when it comes
to what types of plants they feed on. In fact, they are classified as one of
the most destructive bugs in our area. Egg laying begins soon after the adults emerge from
the ground and mate. Females leave plants in the afternoon, burrow 2 to 3
inches into the soil in a suitable area and lay their eggs–a total of 40 to 60
during their life. The developing beetles then spend the next 10 months in the
soil as white grubs. The grubs grow quickly and by late August are almost
full-sized (about 1 inch long). Grubs feed on the roots of turfgrasses and
vegetable seedlings, doing best in good quality turf in home lawns, golf
courses, parks, and cemeteries. However, they can survive in almost any soil in
which plants can live.

HOW DO I KNOW IF I HAVE JAPANESE BEETLE DAMAGE?

Leaves with multiple holes and skeletonized leaves on plants are symptoms that may indicate the presence of Japanese Beetles. It is often easy to see the adult beetles as they land and feed on the leaves of plants and trees. Brown patches of grass often indicates a high infestation of grub.

I HAVE EVIDENCE OF JAPANESE BEETLES, NOW WHAT DO I DO?

If you see even just one, you need to prepare. Japanese Beetles prefer to feed in groups, and that is where the real damage happens. Once they begin feeding, they send out a pheromone alerting other beetles in the area to where the good locations for food are. They can’t fly very long distances, but they can travel far enough to get to adequate food sources.

Once you start to see evidence of Japanese Beetles you may have in your garden, it’s important to be vigilant in getting rid of these pests to prevent further damage. There are a couple ways of dealing with these pests. The first method is hand picking. Yikes!
This method is not for the squeamish! Most people don’t want to touch bugs, but Japanese Beetles do not bite, and you can pick them off plants and either bag them or drop them into a bucket of soapy water to get rid of them. It is easiest to do this early in the morning before the beetles wake up and start moving.

Secondly, and the method we prefer is setting traps AWAY FROM the affected area is the best choice.  Japanese Beetle traps should be placed about 50 feet apart. How many you need depends on how much coverage you need. Keep in mind, you will also attract more beetles than what are affecting your plants. We suggest talking to your neighbors. If you are having an infestation, they are too. Sugggest they also join your effort in controlling the adult Japanese beetle population. We carry Safer Brand Japanese Beetle traps and accessories. And have found them most effective when you follow their placement directions.

If you don’t like the idea of the bags in your yard, you can use the third method. Which would be to apply any number of chemicals on the market to kill adult Japanese Beetles however, you also risk killing beneficial insects such the honeybee or praying mantis. We do carry several products that will do the job made by Bayer, Ortho and Bonide. Stop in and let us show you which product is best for your needs.

I WON THIS BATTLE HAVE I WON THE WAR?

We wish the simple answer was YES! Now the disappointing news. Remember we said the egg laying begins soon after the adults emerge from the ground and mate? Chances are this cycle started long before you ever noticed the initial damage.  Now it is time to consider the grubs. Grub killer application can be done any time of the year during which the ground is not frozen. Again, talk to your neighbors, grubs from their yard become beetles next year and will not know the property lines.

We carry Milky Spore and Scotts GrubEx. Both are found to be equally effective in killing grubs when the manufactures directions are followed.

Founded in 1932, we are a family owned nursery and grower located in Armbrust, Pennsylvania. We have the area's largest selection of high quality plants and trees. We pride ourselves with providing hand-selected, zone-hardy nursery stock to provide you with the best selection possible.

Feel free to contact us about any questions or concerns you may have!